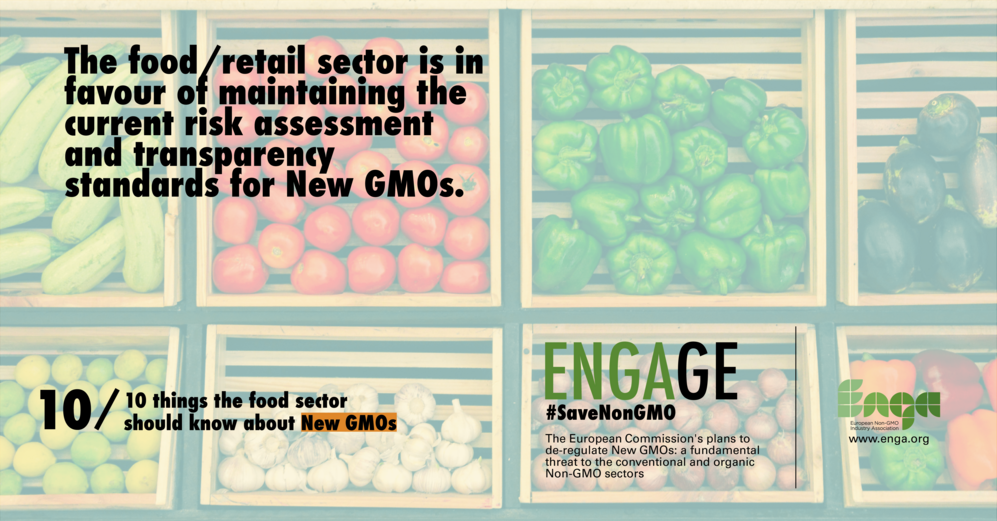 The food/retail sector is in favour of maintaining the current risk assessment and transparency standards for New GMOs.

The European Commission, heavily backed (and lobbied) by big seed companies, is set on a path towards deregulation of New GMOs (GMOs created using technologies like CRISPR, Cas, Talens and others). What we know so far, from EU-wide polls, is that consumers - when they know what New GMOs are (there is generally quite low public awareness) – want them to be labelled. What was rather unclear up until now is what the food processing/retail sectors thinks about New GMOs and their impending deregulation.

The European Commission’s public consultation, as part of its Impact Assessment process into New GMOs, whilst condemned by many (including ENGA) for its flawed methodology and biased questioning, did throw light on some interesting findings. One of the key takeaways of the recently published summary report, was that  the food sector is generally in favour of maintaining  the current risk assessment for New GMOs as well as transparency via a physical label on the final product.

Transparency and risk assessment are key

The view that the risk assessment requirements of the current GMO legislation should be maintained was expressed by 22% (480) of total respondents to the survey. According to the report, among the economic sectors, this view was expressed by the majority of organic and GM-free operators and the large majority of food retail/services. It was also the most selected reply of the food processing/manufacturing sector.

According to the summary, views of respondents varied on how transparency for consumers and operators can be ensured for plants produced by targeted mutagenesis or cisgenesis. The most selected response was that transparency can be achieved via a physical label on the final product (29%).

Achieving transparency via a physical label was expressed by the majority of organic, food retail/services and the great majority of GM-free and organic sectors; it is also the view most expressed among food processing/manufacturing.

This backs up early signs of hesitancy among major UK supermarkets, who reportedly are not keen to sell New GMOs to their customers. (England is a step ahead of the EU in its plans to deregulate New GMOs, with the “Genetic Technology (Precision breeding)” bill currently going through the final legislative processes). Indeed, this point of view is hardly surprising, bearing in mind that it is the retailers who will have to face the anger of their customers when confronted with the fact that they are being sold food containing invisible and untraceable GMOs.

What consumers want is already clear

That the food sector is keen to retain the status quo regarding risk assessment and transparency requirements is natural given the fact that the majority of EU citizens want GMOs, including food produced with New Genomic Techniques (NGTs), to be labelled as such. In an EU-wide opinion poll commissioned by the Greens in the European Parliament in March 2021, it was found that 68% of respondents who have heard about new GM techniques, want GM food produced with those techniques to be labelled as GMOs. Furthermore, 86% of respondents who have heard about GMOs in general want GMO food to be labelled as GMOs.

Will the EU Commission listen?

The summary report’s findings (although only a glimpse at the overall findings of the consultation, which have yet to be published) are revealing and beg the question how and to what extent the Commission plans on taking on board stakeholders’ and, indeed, European citizens’ views. Especially in the light of the European Commission’s newly published (on 18th October) Work Plan for 2023 which officially announces its intention to present a legislative proposal to deregulate New GMOs, scheduled for the second half of 2023. It seems that the deregulation was already on the cards, whatever the Commission’s so-called consultation concluded, the question is now whether and to want extent, the Commission plans on listening to the food sector and EU citizens.