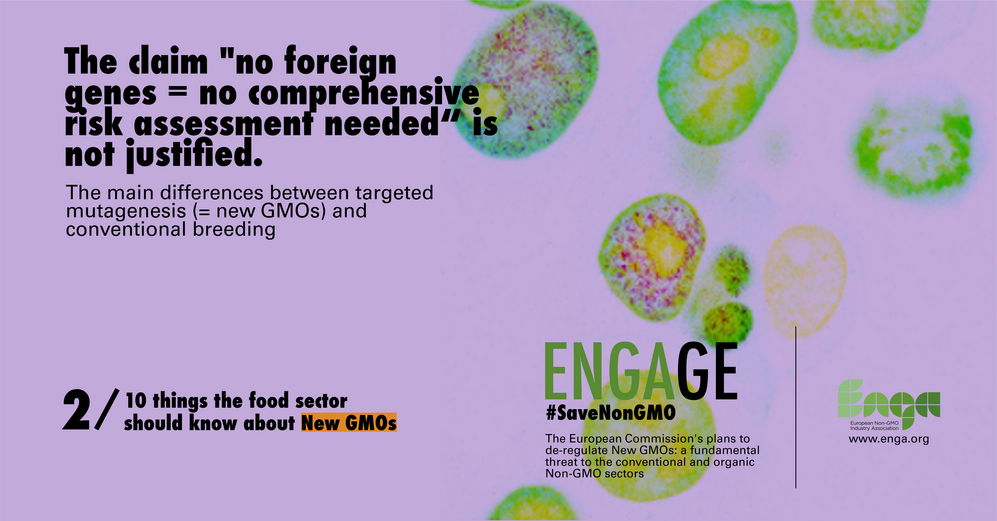 Targeted mutagenesis is the term for new GMOs that are produced with new genetic engineering methods, such as CRISPR/Cas, TALENs and others. In this article we examine the main differences between New GMOs and coventional breeding.

Targeted mutagenesis or genome editing is the term for New GMOs that are produced with new genetic engineering methods, such as CRISPR/Cas, TALENs and others. Often it is claimed that no genetic material from other species is permanently integrated. This is definitely not the case for Site-Directed Nuclease-3 (SDN-3), which is gene editing that adds foreign DNA or genes, even from other species. And with all kinds of gene editing (SDN -1, -2 and -3), there can be inadvertent integration of foreign DNA in the genome, which can be present in the marketed product. This is due to the way it was produced: In the process of CRISPR gene editing, genetically engineered plasmids (circular molecules of DNA derived from bacteria) are used to introduce the genes carrying the information for the components of the editing tool. The idea is that these plasmids will be present in cells only temporarily, but this can go wrong: The gene-editing tool encoding plasmids can be inadvertently inserted as a whole or as fragments, either at the intended edit site or scattered throughout the organism’s genome.

Is targeted mutagenesis a similar process to conventional breeding?

With genome editing methods such as Crispr/Cas and TALENs, genomes can be modified to a previously impossible extent and at a previously impossible speed, even without inserting foreign genes. Because they can be applied - individually or in combination - repeatedly, simultaneously or consecutively in one and the same organism, they can be used to modify organisms to a far greater extent than was or is the case with old genetic engineering or conventional breeding. So-called multiplexing targets several genes at once. This causes profound alterations in an organism even without introducing any additional DNA sequences.

Genome editing opens up new possibilities by making large parts of the genome accessible for changes. This is new - and specific to new GMOs.  The Netherlands Commission on Genetic Modification COGEM describes this potential of gene editing as follows: “Now that we are sequencing genomes, we know that the genes the breeders select and cross out are located at the ends of the plant chromosomes. But the genes in the middle, that is about 30 percent of the genes, are not accessible to breeders. With gene editing we are able to change genes we have never had access to before.”

Conventional breeding and targeted mutagenesis: No insertion of foreign genes = absence of risks?

The equation “no foreign genes = no comprehensive risk assessment needed”, an often heard narrative, is not justified. This is backed by the EFSA opinion on Synthetic Biology: Using the example of Crispr/Cas wheat EFSA explains: “(…) the large number of mutations required to achieve gluten-free wheat is far beyond any plant previously assessed.”

Genome editing can generate new and complex genotypes without inserting any additional genes. ENGA is calling for a thorough and transparent risk assessment for all new GMO products, not an a priori exclusion of whole groups of new GMOs based on assumptions. As a minimum, these products need to be kept under the current GMO regulations, which require risk assessments for health and environment, traceability, and clear GMO labelling.

Up to now the safety of these products primarily is a mere claim, not substantiated through systematic or independent studies. There is hardly any experience with new GMOs with only three products on the market.