10 things the food sector needs to know about New GMOs 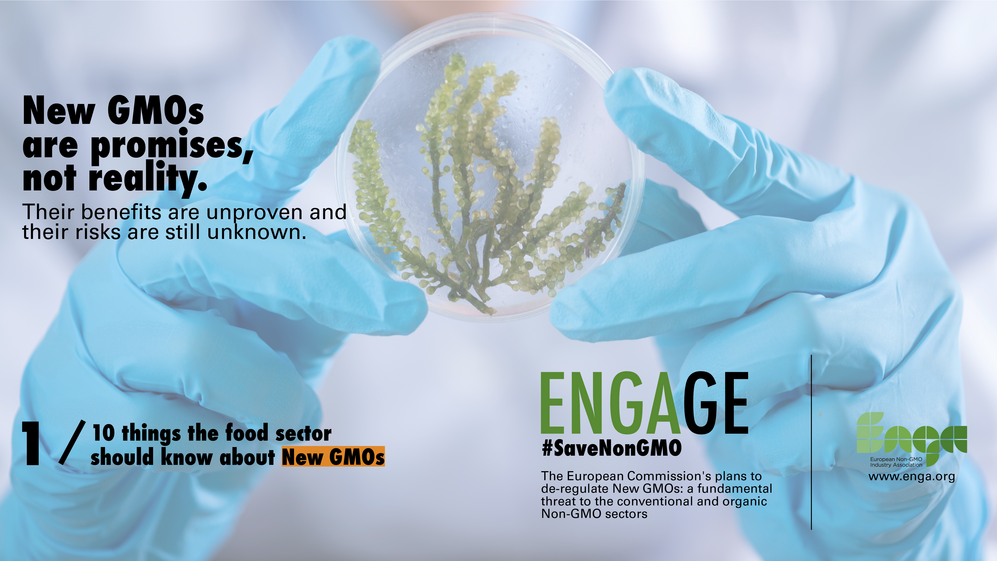 New GMOs are promises, not reality. Their benefits are unproven and their risks are still unknown…

What are new GMOs?

Promises and conjecture, not reality

Until now new GMOs are promises, not a market reality. Only three crops in three countries have made it to the market: a herbicide-tolerant oilseed rape grown in the US and Canada, a soybean with an altered fatty acid profile to be used in deep fryers (USA) and a tomato which is supposed to lower blood pressure (Japan).

The debate on deregulation is based on promises associated with new GMO products: Promises are being made that new genomic techniques create crops which contribute to sustainable agriculture, will help us resist the climate crisis, stop biodiversity loss and secure the competitiveness of the EU economy. These promises are not fact based. They are used tactically by proponents of a deregulation of new GMOs.

Another herbicide-tolerant, pesticide-use promoting crop, a soybean that is not popular with farmers because of lower yields, a tomato which offers mere health claims, cannot be considered as contribution to a sustainable agriculture.

When will they become reality?

It is rarely concretely communicated in which state of research and development new GMOs are, when they will be market-ready and marketed.  In April 2021 the EU Commission’s Joint Research Center (that relies widely on companies’ indications) listed 16 new GMOs in a pre-commercial stage, i.e. they should be on the market within the next five years. Six out of 16 are herbicide-tolerant – carrying the same trait as the majority of old GMOs - they contradict the Green Deal goal of a 50% reduction in the use of pesticides by 2030.

With claims about the ‘potential’ of new GMOs it is suggested that complex societal, political and economic problems can be solved by changing the plant genome  with a technical intervention through new GM techniques. Such a narrow view is in danger of seeking a simple technical solution to complex problems, continuing a system of agriculture with problematic impacts on the environment and society and preventing sustainable solutions.

If there is no new genetic material from different plants, then does this mean no new risks?

Proposals to exempt genome edited crops from regulation largely rest on assumptions about similarities between genome editing and conventional plant breeding that neglect fundamental differences. Up to now the safety these products primarily is a mere claim, not substantiated through systematic or independent studies. There is hardly any experience with new GMOs given that there are only three on the market.